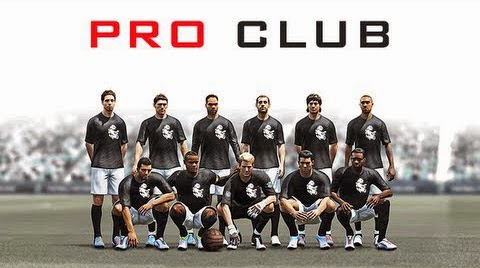 1. When you are playing a game, and click the button to see player assignments and names by position, the real human players should have their color icon by their names so you can tie the real players to their assignments and easily distinguish them from cpu players. This should also be true when selecting players for free kicks or pks, names should have a color icon symbol next to them.

2. Think of any mechanism to keep players from playing goalie and then running around the field, whether it's a vote kick or simply allow the captain of a team to propose a vote kick. Player rating goes to zero if it's not the last minutes of the game? But as it is now, having accomplishments push players towards playing goalie when some obviously don't really want to is like the opposite kinda of encouragement that is neccessary to fix probably the number one problem with drops ins--bored and uninterested goalies.

3. Allow us to select the ball shown on our local screen for pro clubs

4. Give us the option of us turning off player chat without having to design our own means. If you're on a team or one in five or ten drops in, maybe the chat is helpful. However in drops it is mostly people blasting music, whining, etc, which is why 60 percent seem to have no mic plugged in whatsoever which is probably a sign they are playing with no sound and opting for their own less annoying soundtrack. I'd like to be able to turn off player chat and chat icons if I desire, so I can play sound on my tv without fart noises, etc. thanks


5. The practice field and warm up before each game should use your camera view selected somewhere in settings. As it stands now and has for years, many play in one camera but practice in another. This is really absurd. How many years before this is fixed?

7. Park the bus the whole game is extremely boring. We park, they park or vice versa. What's really accomplished. We could all both shoot ourselves in the foot and call it equal as well.
Post By Unknown Times： 5/18/2015